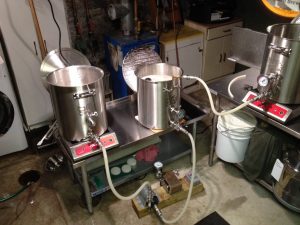 Our own Spargin’ Vardjan just finished his induction brewery set up! Using a Kickstarter campaign for BruGear, the components all came together for a Thanksgiving weekend first brew day.

A full write up with more photos can be found at imgur.com/a/waSDZ

With all his kegs full, Shane decided to tear his brewing system down and make a few changes.
It’s a work in progress, but read more about the project on his site www.brandedbrewingco.com 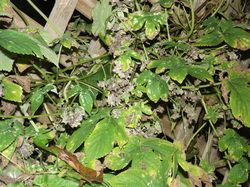 After looking at some pictures it appears the our hops were not yet ripe or were Japanese hops, an invasive non-native plant that is not used in beer making.  One plant produced 1000+ cones while the other two of another variety barely survived. The vines were cut yesterday and will be picked this weekend if we decide to keep the cones.  The yellowing is probably an endophytic phytopathogen from either the verticillium or fusarium fungi families.  The spotting is called chlorosis and is common to see with wilt fungi.  Only way to control it is good garden sanitation. 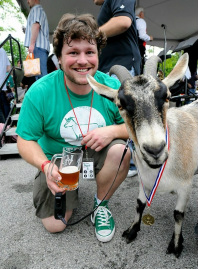 Our own Colin Presby and his three-legged phenom won
the 2012 Sly Fox Goat Races, making them just the second
two-time champions of the annual festival. 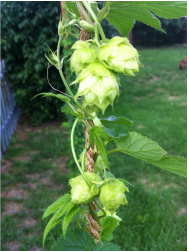 Not a super fruitful harvest, but a promising start for sure. I went up and down each vine in early September with a clippers and cut the stem as close to the cone as possible. Then dried them on an old screen in the basement over 2-3 days.

The clipping encouraged new growth on the Galena vine and produced about 15 more cones off the very end. Starting weight was 1.2oz for the Galena, and dried final was .5 oz., pretty good for a first year single vine. Two Nugget vines, which are rumored to be a difficult variety, started with a wet weight of .6oz, and dried at. .2oz. All are currently in my freezer and will be used to dry hop an upcoming IPA.

I let the vines grow until a week before the freak snowstorm and anticipated first frost, cutting them down to just barely above ground level, as recommended. I may add another Galena vine next spring, planting maybe a little earlier. — Jeremy Drey 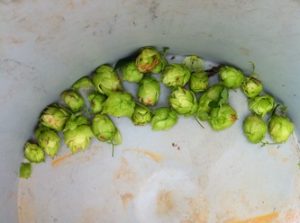 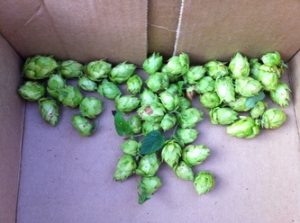 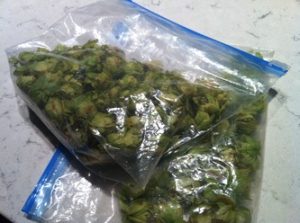 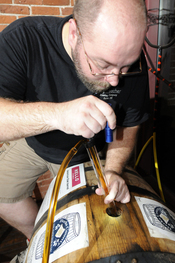 In April and May, 10 members combined to brew 55 gallons of a classic style Belgian Dubbel, choosing their preference of all grain or extract and each fermenting individually. A special thanks to Weak Knee Homebrew Supply in Pottstown for creating our kits. We combined everyone’s batch into an oak bourbon barrel courtesy of Weyerbacher Brewing.

All of the beer was combined on May 10, the barrel was outfitted with a blowoff tube for any extra fermentation with varying stages of the beer from different brewers, and a big thanks to Canal St. Pub, our monthly meeting location, we were able to store it in the dining room for all to see and read about.

Club members would check on the beer at our monthly meetings, using a sanitized wine thief to check the progress of the aging and flavoring. Each month produced a different flavor as the beer grew more complex. We have just emptied the barrel on Sept. 27, allowing the beer to sit for 4 1/2 months. Each member got back the amount they put into the project, and will be bottling or kegging on their own. 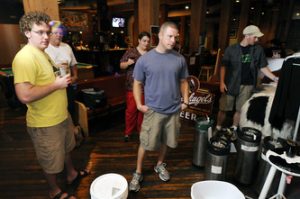 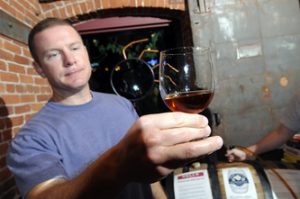 I wanted to share a few quick suggestions from a trip my wife and I made last month to Pittsburgh. A small brewery to visit, and relatively in the city limits, but NOT walkable from downtown, is Church Brew Works. It has an awesome atmosphere, see pictures below, and solid tap selection. Some beers could be considered underwhelming, but are still far better than the big 3 and some of the other Pittsburgh beers.

Another must stop is on the South Side’s main strip Fat Heads. A huge selection, again see photos, and a few of their own brews. They might have those contract brewed, I did not get to ask. Just half a block down is one location of the steel-city staple Primanti Bros. with an uncanny ability to immediately clog your arteries. Sandwiches have french fries and slaw added to the regular fare and grilled. Even if you are hesitant it is a must try. If you mention that you didn’t stop to a Burgh native, you’ll be shunned. Multiple locations, just ask. — Jeremy Drey

Want to write a trip blog entry, please send one from the contact page. 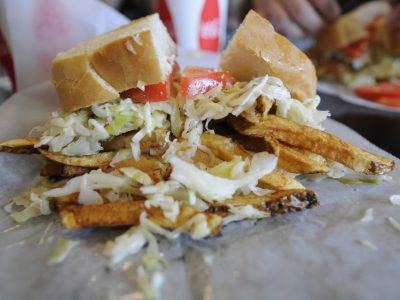 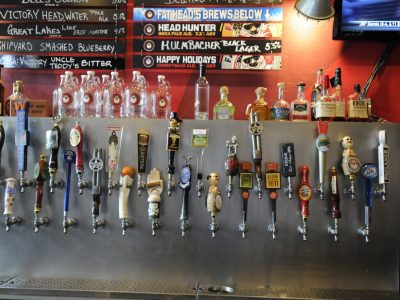 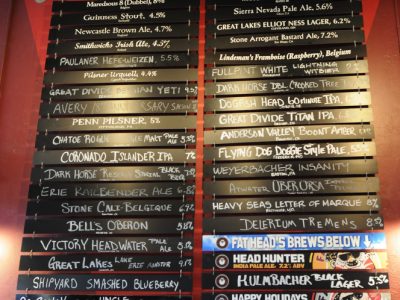 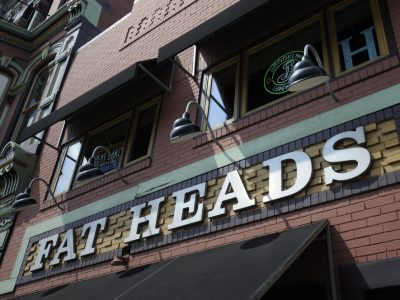 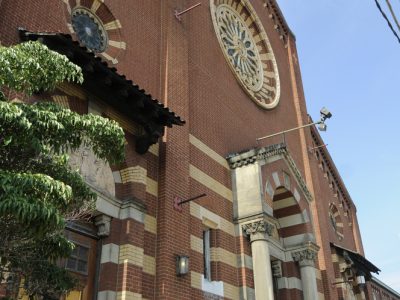 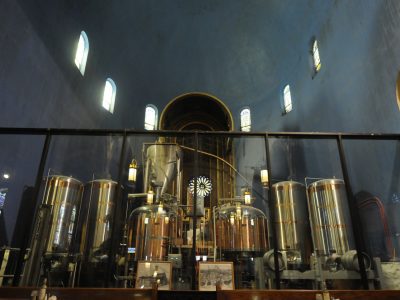 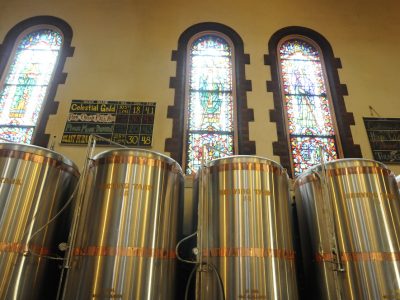 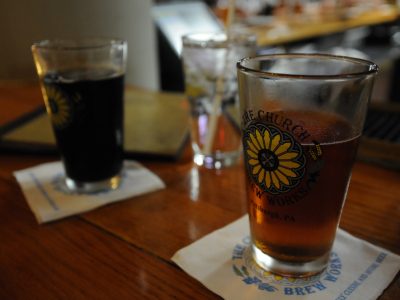 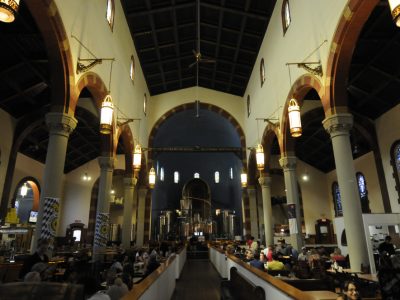 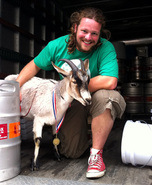 Our own Colin Presby ran with Peggy, his triped pygmy goat, in the micro brewery’s 12th annual goat races in May. As a champion, she bleets fame and glory, and has a fondness for delicious beer.

Join TEAM PEGGY on Facebook to see video from the races, photos of the festivities and the web presence that our gold medalist, and Peggy Bock namesake, has generated!

It’s been a while since I posted about my first foray into hops horticulture.

For a first year planting, I’m very happy with what is growing. 3 of my 4 plants took root, losing one nugget rhizome. They started VERY slowly, not peeking out of the ground until the beginning of May, but I also planted late in the season.

A trellis was my June project. I went simple. Two holes. Two posts. I got 12’pressure treated 4×4’s and dug down 24″ into the ground. Built a brace and cemented them in. Total cement level was about a foot and figured, with backfill, the weight of a few vines was not going to knock it over. 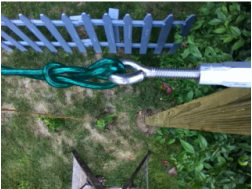 Once everything was set, I used a coated washline, two eyelets, and a turnbuckle. I affixed one eyelet and washline to the left post, then the other eyelet into the other post. The turnbuckle had a hook on one end that I ran through the open eyelet, so now as the weight of the vine may sag the washline, I can simply tighten the turnbuckle. Magical mechanics at work.

Finally, with my original purchase I got some coir yarn to lead the vines. Tied individual leads to the washline, dropped it to the ground, tied them to stakes and started training the established plants. It didn’t take long for the growing to really take hold. We have been skyward ever since, and all three plants have now reached 5′ tall. Because of the late start, I’m anticipating a September harvest. Even if it’s a small one with low alpha acid I’ll still be happy. — Jeremy Drey 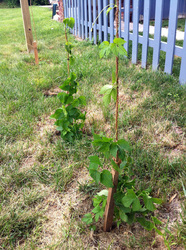 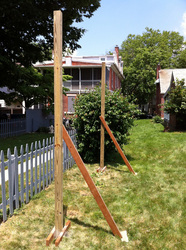 On Saturday, July 2nd, a small but enthusiastic group of us conducted a tour of local brewpubs and taverns in Lancaster County. Trip commenced at St. Boniface in Ephrata, our area’s newest nano-brewery started by two homebrewers, Mike Price and John Northup. While their doors have only been open since late winter, they have been producing high quality beers that are worth checking out. 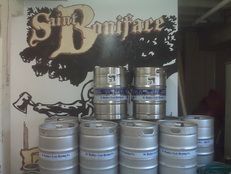 They’re open for growler fills and tastings. Look for them on tap at an ever increasing number of locations. One item of special note our own Mike Kuhns has been working with Mike and John and you may run into him if you stop by on a Saturday morning.

Next up was the Bulls Head Public House in Lititz. Though not a brewery, they offer 14 rotating International and American craft beer selections combined with two rotating cask ales. As you probably guessed, Bulls Head is modeled after an English Pub, with all service conducted through the bar (no waiters or waitresses). When you visit, make a point to visit the Mens Room. However, joining the nice lady in the bathtub is strongly discouraged.

After two stops we were all in the mood for food. What sounds better than craft beer and BBQ? You definitely need check out JoBoys BrewPub in Manheim. They’ll tell you up front that their focus is the Southern style BBQ and beer is secondary, but we all came away impressed with their draft selection including American IPA, Manheim Red, Porter, Wheat, ESB and Raspberry Summer. Try the sampler when you visit and then order a pint of your favorite. And if you leave JoBoys hungry, that is your own fault. Tasty brisket, chicken, ribs and pork will make you think you are in North Carolina, not Pennsylvania. For those who like jalapenos, check out the Atomic Buffalo Turds appetizer. On the way out the door, we were fortunate enough to meet Jo Harless, who owns JoBoys with her husband Jeff. Jo was kind enough to sign copies of Lew Bryson’s Pennsylvania Breweries. 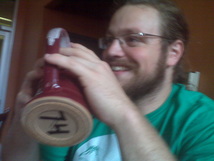 Our last stop was the recently opened Spring House Brewing Company Taproom in downtown Lancaster. Spring House Brewing was founded by Matt Kasey in 2007 and crafted in a converted barn in Conestoga, PA. Since then, Spring House has experienced strong growth and in February 2011 opened the Taproom on 25 West King St. The barn has become the production facility while the taproom offers pints, growler fills, 22oz bottles and six packs to go. Beer is definitely their main focus, however an expanding food menu is available with appetizers, soups, sandwiches and pizza. Unfortunately, we just missed a visit with Matt. However these beers are so good that I am sure Spring House will again be a stop on the next tour. Order a sampler and take a minute to play a game of shuffleboard.

Special thanks go out to Colin for volunteering to be DD. — Eric Dickson
Photos courtesy of Erin Negley